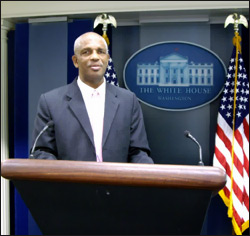 Press Secretary to the Prime Minister of St. Kitts and Nevis, Mr. Erasmus Williams, was among Press Secretaries from the Eastern Caribbean, who attended an International Visitor Leadership Programme in Washington, D.C. last week.

The objectives of the programme were to review the history of public information in the United States including the role of the Freedom of Information Act; learn about information sharing and transparency at the Federal, State and local levels including discussions with professional counterparts to discuss challenges and share experiences; observe concrete and practical functions of press spokespersons and explore relationships and cooperation between the government and the media and the government and the general public.

Following the introduction and welcome on Monday morning by Ms. Pat Kowall, Programme Officer in the Bureau of Educational and Cultural Affairs in the United States Department of State, participants heard from Professor at the School of Media and Public Affairs of the George Washington University, Dr. Steven Livingston, who gave an overview of the media in the United States. Dr. Livingston highlighted the relationship between government and media as well as the role of media in foreign policy-making.

Assistant Professor at the American University School of Public Affairs, Dr. Barbara Palmer,  gave an overview of the United States system of government, its decentralised nature and the decision making process that flows from the system.

A visit to the U.S. Department of State on Tuesday afforded the participants to hear from the Director and Media Analyst at the Bureau of Public Affairs, Rapid Response Unit, Mr. Leonard Scensny, to discuss strategies for providing government leadership with constructive advice when dealing with intense, time-sensitive issues.

Mr. Scensny highlighted the role of the Rapid Response Unit which has been operating in the State Department since October 2005.

Director, Policy and Litigation in the Office of Information and Privacy in the U.S. Department of Justice, Ms. Melanie Pustay, discussed the Freedom of Information Act and its operations.

A visit to the Pentagon, headquarters of the U.S. Department of Defence on Wednesday morning, afforded the participants the opportunity to meet with Colonel Greg Julian, (US Army), Office of Joint Communications in the Office of the Secretary of Defense and Commander Jeffery Gordon, (US Navy) Press Officer, Media Operations for South and Central America in the Office of the Assistant Secretary of Defense for Public Affairs  to discuss Public Affairs and press relations highlighting media monitoring, clippings and news analysis.

The Press Secretaries from the Eastern Caribbean visited the United States Senate on Wednesday afternoon and saw the lawmaking body in session, briefly attended a Press Conference by Independent Sen. Joe Lieberman and Republican Sen. Susan Collins and met with Erin Diamond and Eric Jacobstein of the United States House of Representatives Committee on Foreign Affairs Subcommittee on Western Hemisphere.

On Thursday, a visit was made to the White House where the group met and held discussions with the Special Assistant to the President and National Security Council Spokesman, Mr. Gordon Johndroe to discuss strategies for providing constructive advice to the President; joined the White House Press Corps to see President George Bush leave the White House on Marine One for the flood areas in the Midwest and later met with the US Department Justice Spokesperson, Criminal Division, Ms. Laura Sweeney on media relations.

On Friday the group visited the OECS Embassy in Washington, D.C. before going to City Hall in Baltimore, Maryland to meet with the Acting Press Secretary to the Mayor and Head of Communication at the Police Department, Mr. Sterling Clifford and then on to Annapolis, Maryland where they met with Christine Hansen, Deputy Press Secretary in the Office of the Governor to discuss the role of a public relations officer, the department’s relationship with the local government, and methods used to deliver information to the public.