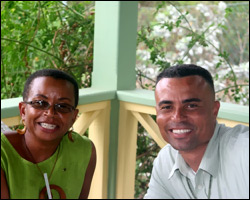 President of the University of the Virgin Islands (UVI) Dr. Laverne Ragster on July 03, 2008, treated past and present students who are also nationals of Nevis to lunch at Banana’s Bistro.

The President, who was in the Federation, opted to mingle with alumni students here and also used that time to update the gathering on changes within the institution.

“We are here to speak with our Clarence Fitzroy Bryant College officials and with your Minister of Education at the Federal level in terms of how we can change the articulation agreement we have with the college to the next level,” Dr. Ragster said.

She said that while it was positive for past and present students to encourage others to attend UVI, it was also important that they advised prospective students well.

Dr. Ragster also spoke of the recent increase in tuition that would take effect in the Fall 2008 semester.  She also advised currently enrolled students to visit the financial aid and scholarship offices to help defray the costs.

The president told NTV’s Channel 8 that UVI had a high number of alumni students with the most from the Federation of St. Kitts and Nevis.  The twin island Federation, according to President Ragster, was second in enrollment only to the United States Virgin Islands (USVI) and British Virgin Islands (BVI).