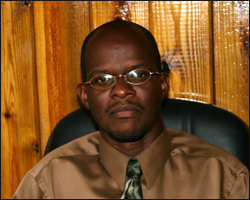 Property owners with objections based on property valuations under the Property Tax Ordinance which was passed in the Nevis Island Assembly in April 2008, can now take their grievances to a body of persons who were given the mandate to make determinations in relation to their objections.

During an interview with the Department of Information on June 30, 2008, Legal Advisor in the Nevis Island Administration (NIA) Mr. Patrice Nisbett, disclosed that the Valuation Review Board which was appointed by the Minister of Finance Hon. Joseph Parry and became effective as of June 01, 2008, would be chaired by Ms. Yasmin Clarke with members Mr. Mervin Richardson, Mr. Eustace Hunkins, Mr. William Griffin, Mr. Vernon Evelyn and Secretary Mrs. Semona Johnson-Morton.

“The powers of the Board are to determine any complaint that is made before it on a specific matter. For example the tax payer may complain about the description that is placed in a valuation notice that is received.

However, Mr. Nisbett also spoke to one of the Board’s most important powers and cited that the Ministry of Finance believed it would be the area from which most complaints would originate.

“One of the most important powers would be to hear and make the determination in relation to objections based upon the valuation that has been assigned to a particular property,” he said.

Notwithstanding, Mr. Nisbett explained that Board Members would be installed for a three year period but noted that under the Ordinance, the Minister of Finance could determine the length of time each board member could serve.

The Legal Advisor said further, that the Nevis Property Tax Ordinance was designed to modernise property tax in Nevis. The legislation as it was drafted, did not introduce a new tax but instead introduced a new method of property valuation, for the purpose of the payment of property tax.

“We believe by the introduction of this method of valuation, we will in fact introduce a more equitable and fairer system whereby persons who own properties can be valued for the purpose of property tax collection, property tax assessment,” he said.

The legislation as drafted, Mr. Nisbett also said, had advantages and gave certain discretionary powers to the Minister to deal with hardship cases. There was also a threshold requirement with regard to exemption. If a residential building was valued less than $80,000, then the house only would not be liable for property tax payment.

Mr. Nisbett told the public that they could take any queries or questions they had in relation to the Ordinance to the Inland Revenue Department. He said the staff was knowledgeable on the legislation as drafted and would be able to deal with all the issues that would arise as a result of the passage and implementation of the Ordinance.