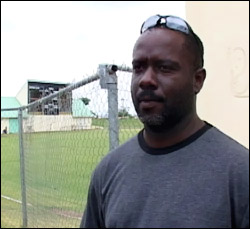 The outfield of the Warner Park cricket stadium and the practice turf of the Len Harris Cricket Academy will remain in top shape when the Australian and West Indies cricket teams battle in St. Kitts on July 4 and 6.

The regular maintenance schedule of the Ministry of Sports coupled with the recent donation by Reginald Francis of St. Kitts Marine Works, will ensure this.

Mr. Francis explained that he held discussions with the grounds men at Warner Park and learnt that a specialized type of sand was required to aid the nourishment of the field. He added that the sand is not native to St. Kitts and Nevis and so he acquired the coarse sand from St. Maarten.

“St. Kitts Marine Works “¦ transported it [the sand] via barge, we trucked it here to Warner Park and took care of all of the expenses,” Francis said, adding that the investment in sports is money well spent as it positively impacts young people.

The sand was delivered to the cricket stadium on the weekend.

Permanent Secretary of Sport Lloyd Lazar told SKNIS that the Government was grateful for the partnership with Mr. Francis. He noted that the Minister of State for Sport Hon. Richard Skerritt is knowledgeable of the impact the sand has on the outfield and was impressed with the spirit shown by the entrepreneur.

“This is going to assist with the nourishment of the turf and ensure that the grass grows in a satisfactory manner, maintaining a level of “¦ international standard,” he stated. “When visitors come to the facility they will see a turf of high standard whether it is in the cricket facility or at the football facility,” Mr. Lazar stated, citing the number of sports tourism teams that visit.

Warner Park will play host to two international events in the coming months. The St. Kitts Music Festival from June 26 to 28 and the aforementioned One Day Internationals in the Digicel Home Series 2008.