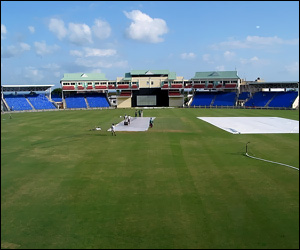 They need to win to secure first spot and an automatic berth to the final. Likewise, victory is equally important to the Tridents. If they lose, the Barbados-based team will not be able to finish higher than third in the table and will have to go through a semi-final playoff to get to the final.

Ahead of the clash, Tridents coach Robin Singh said: “We will be working hard here in St Kitts to ensure we have the right momentum for the semi-finals next week. Over the past few weeks, I have seen some promising signs that we are progressing well so I am anticipating some rewards.”

Tridents’ captain, Kieron Pollard, is also liking what he is seeing from the team. “We have a good chemistry at the moment and here in St Kitts it is truly crunch time, so we have to deliver tomorrow (today) and on Sunday. It will not be easy, but we have the heart and the drive to do well.”

Australian born Simon Helmot, coach of the T&T Red Steel, spoke about St. Kitts. “Warner Park is truly a fantastic ground and it adds another dimension to what the Caribbean is all about. I have coached in the IPL and in Australia and I must say the Caribbean is the best. It may be my first season coaching in the CPL, i would like to come back in a heartbeat next season.

Meanwhile, Antigua Hawksbills coach, Tim Nielsen, has been particularly impressed with the aggressive cricket that all teams have tried to play throughout the Limacol CPL which had led to some excellent matches and a very lively atmosphere in the grounds.

Tim Nielsen said: “The standard of the cricket so far has been very high and great to watch, and the fielding in particular has really impressed me throughout the tournament. “I have also been loving the atmosphere in the grounds, there is even a swimming pool here where the fans can watch cricket from, you just don’t get that in Australia.”

Guyana Amazon Warriors head coach, Roger Harper, feels that the competition has been extremely well received this year across the Caribbean and the beautiful Warner Park stadium will provide a perfect climax to the tournament.

Roger Harper said: “We are all looking forward to playing in St Kitts and want to use the two remaining group games to put in good performances and prepare ourselves for next week.
“We haven’t really thought about where we are aiming to finish in the table””we are just concentrating on playing well and we will then see how things lie for the knock out stages.”