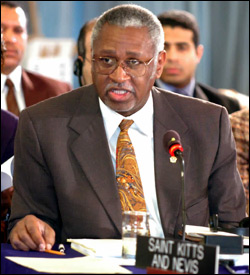 Art works by nationals of St. Kitts and Nevis will be on display in The Gallery at the Organisation of American States (OAS), a reception hosted by Prime Minister Hon. Dr. Denzil L. Douglas and a dialogue on “Positioning St. Kitts and Nevis for Competitiveness over the past 25 years ““ The role of the Disapora” are among activities organised to celebrate the Silver Jubilee Independence Celebrations in Washington, D.C. next month.

St. Kitts and Nevis’ Ambassador to the United States, His Excellency Dr. Izben C. Williams said the activities will be held over the period September 2nd to 7th 2008.

He told the Communications Unit in the Office of the Prime Minister (CUOPM) that nationals of St. Kitts and Nevis from across the United States will travel from their respective domiciles and converge on the U.S. capital, Washington DC, that weekend to celebrate the Twenty-fifth Anniversary of Independence.

“The celebratory activities are being organised by the Embassy in Washington in collaboration with the Associations of St. Kitts and Nevis Nationals throughout the United States.  Associations of St. Kitts and Nevis Nationals are known to exist in Florida, Georgia, the Carolinas, Texas, Washington DC-Virginia-Maryland, New York, New Jersey and Boston, and our nationals are to be found in many other States in smaller numbers,” said Ambassador Williams.

Prime Minister Douglas will participate actively in the weekend events which will include the Independence Reception at the OAS Hall of the Americas on Friday 5th September during which he will be the Special Guest. Music will be provided by Elli Matt & Friends.

Dr. Douglas will deliver the opening remarks and set the stage at the Dialogue: “Positioning St. Kitts and Nevis for competitiveness over the next 25 years ““ the role of the Diaspora” at the Capital Hilton Hotel on Saturday 6th September. The panel will comprise distinguished nationals of St. Kitts and Nevis.

The Independence Church Service on Sunday 7th September will be held at the Holy Comforter Episcopal Church and the Guest Preacher will be Rev. Isaiah Phillip, Acting Chairman of the St. Kitts Christian Council.