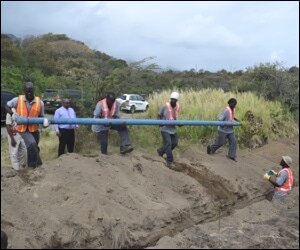 Minister of Public Infrastructure, Honourable Ian Patches Liburd, recently stated that his Ministry along with the Ministry of Finance is doing all in its power to help citizens weather out the drought.

The minister stated that Mansion residents, including those living in Phillip’s Village, Molineux and Borryeau, have been greatly affected by the lack of rainfall.

Prior to the launch of the project to improve the water supply in these areas, Minister Liburd said he received a message from a resident that resonated with him as he noticed the need for a solution was needed more than ever.

“I responded that we are addressing the problem and what we are doing now shows that actions speak louder than words,” said the minister.

“We are taking the people’s tolerance level into consideration,” said Minister Liburd. “We are spending over $600, 000 on top of the $5 million budgeted for the Water Department. So, we want to thank the Ministry of Finance for its help.”

The minister mentioned that equipment was also sourced to access the water supply in these areas. In fact, six vehicles were handed over to the Water Department recently.

Minister Liburd also praised the “innovative thinking, as well as the management and staff of the Water Department for discovering that the area was in excess of 160,000 gallons of water.” He said that it is hoped that this can be used as “a departure to find water in excess in other areas and use it in spite of the shortage of rainfall and deficits.”

He revealed that issues in Basseterre, where its aquifer is exposed and susceptible to sanding intrusion will also be addressed.

“We are looking north of the Airport, and as the Prime Minister (Dr. the Honorable Timothy Harris) mentioned, $300,000 will be spent to find water there just under Bayfords.

“Studies will be done and there are positive feelings that an estimated 1 million gallons of water could be found to augment the water source in Basseterre which requires some 2.5 million gallons per day,” said the minister. “We are working and we are not just sitting by. We are doing what we have to do and spending money wisely.