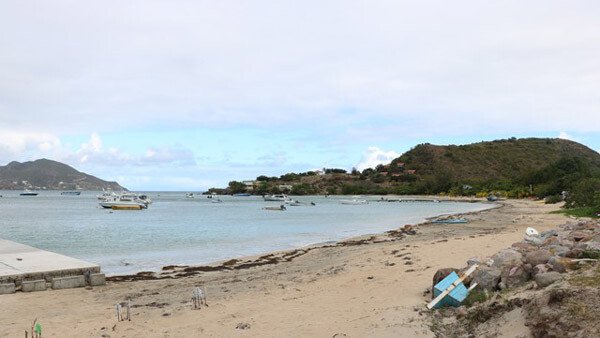 Hon. Alexis Jeffers, Deputy Premier of Nevis, says water taxi owners who ply their trade at Oualie Bay have expressed satisfaction with the Nevis Island Administration’s (NIA) decision to construct a pier for their benefit.

Mr. Jeffers made the comment when he visited the facility under construction on January 29, 2019.

“Persons who are currently plying their trade out of Oualie Beach at the older facility have expressed their pleasure in seeing the workers and the barge being brought back to Nevis to complete this new facility.

“Most of the operators are looking forward to the completion of this facility because they themselves see this as an improvement in the berthing of their craft which in most cases cost a lot of money, and because of that this particular new pier will provide that level of comfort, that level of security, and that level of ease in terms of docking in the future,” he said.

The Deputy Premier, who is also the Area Representative for the St. James’ Parish noted that the existing pier in use by the operators is in a state of disrepair and poses some safety issues for persons using the facility, since it had suffered some damages from previous hurricane seasons.

Mr. Jeffers said although the boat operators are supportive of the project, he believes that on completion, if any apprehension exists, over time they would see the wisdom and vision behind the project in terms of bringing an upgrade to what they would have been accustomed to.