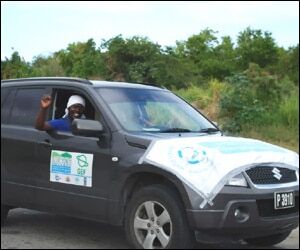 The WSD’s Acting Manager/Water Engineer, T. Dennison Paul, said the annual event, which forms part of the extended 2016 World Water Day activities, has been moved to Friday, April 15. He explained that the event is popular with residents as they come together with water officials to share a drink, exchange information and socialize.

“Basically our thrust is on water conservation,” he said, noting the period of below average rainfall that has been impacting St. Kitts and Nevis since 2015. “What they (consumers) can do is to conserve water in this drought period.”

Mr. Paul described the outreach as “spreading the gospel of water conservation.”

The WSD officials will take the message on air tonight (April 07) when they appear on ZIZ television’s “Round Table.”  The topic is “Building Resilience in the Water Sector.” Additionally, officials are expected to carry the message to schools across St. Kitts.

“Next week schools reopen,” he said, “and so we will be visiting both primary and secondary schools, interacting with the children, and giving them information on the management of the resource, again with emphasis on conservation,” Paul added.

The activities conclude on Saturday, April 16, with a guided public hike to the Wingfield water intake. A tree planting ceremony will also be held on that same day.