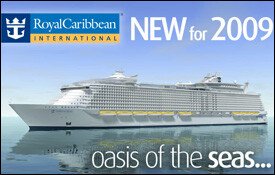 The world’s largest and newest cruise ship “Oasis of the Seas,” can dock at St. Kitts’ Port Zante.

The Federation’s Minister of State for Tourism, Sen. the Hon. Richard “Ricky” Skerritt has disclosed that the 5,400 passenger ship can physically be accommodated at Port Zante and it may happen sometime in the future as the port has been officially assessed as “Oasis capable.”

Sen. Skerritt was among the specially invited guest of Royal Caribbean International and Celebrity Cruises, who spent last Sunday and Monday nights aboard the massive ship which is docked at the brand new Port Everglades, Fort Lauderdale Cruise Terminal 18, which has been designed and built especially to home port the “Oasis.”

The huge ship is about to set sail with passengers for the first time this coming weekend, and will run a winter itinerary which includes three of the largest Caribbean cruise ports of Nassau Bahamas; Charlotte Amalie, St. Thomas and Philipsburg, St. Maarten.

The St. Kitts Tourism Authority quotes Minister Skerritt as describing the “Oasis of the Seas” as “awesome” and the experience on board as “enlightening.”

According to Minister Skerritt, “The innovative designs and standards being employed onboard in delivering customer service, use of technology, and various energy and environmental management systems are instructive for all who have interests in the future of tourism.”

While on board Senator Skerritt toured the impressive ship, which was still undergoing final interior finishing, attended orientation workshops and held discussions with his RCCL hosts, including Chairman and CEO, Richard Fain and Craig Milan, Senior Vice President for Land Operations.

Royal Caribbean International and Celebrity Cruises brought 76,772 passengers to St. Kitts last season and will almost double those numbers to 130,368 this season.

Minister Skerritt predicts that this season’s RCCL numbers will increase by a further thirty percent in the 2010/2011 season.