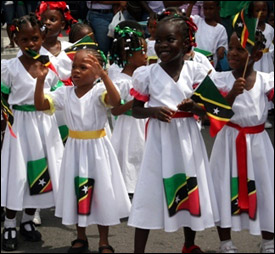 While the theme for this year’s celebration was “Celebrating the present with an eye on the future,” much emphasis was placed on the 25th anniversary of independence for St. Kitts and Nevis.

The students presented brief dances for the general public outside the Nevis Tourism Authority Building in Charlestown.

The march began at the Nevis Cultural Center and culminated at Grove Park where hundreds of children and their parents gathered to celebrate the island’s youth.